Two hours later it was Fish Tank in the lead with 500 points on time over DA Sea, and Southern Pride in third with 300 points. By noon it was apparent that Laura Jessen, the lone angler on Fish Tank, had taken a commanding lead and would be near impossible to beat this time around. At the end of the day, Fish Tank released 1 sail and 6 marlin for 3,100 points and first place for Leg 2, followed by D.A. Sea with 3 sails and 3 marlin for 1,800 points and Eight Eights rounding out the leaderboard with 5 sailfish and 2 marlin releases for 1,500 points. The participating teams released a total of 56 billfish, including 37 sails and 19 marlin.

Going into the third and final event, to be held on Tuesday, March 29th, it is Fish Tank in the lead with 5,300 points over the first two legs, followed by Team Galati in second with 3,700 points, and D.A. Sea in third with 3,600 points.

The top three teams over all three days of competition will be awarded at the final awards banquet on Saturday, April 2nd. The Ladies Only Tournament is a test of skill, requiring a fight between the angler and the fish just like the Signature Triple Crown. No hook and hand for these powerful lady anglers! 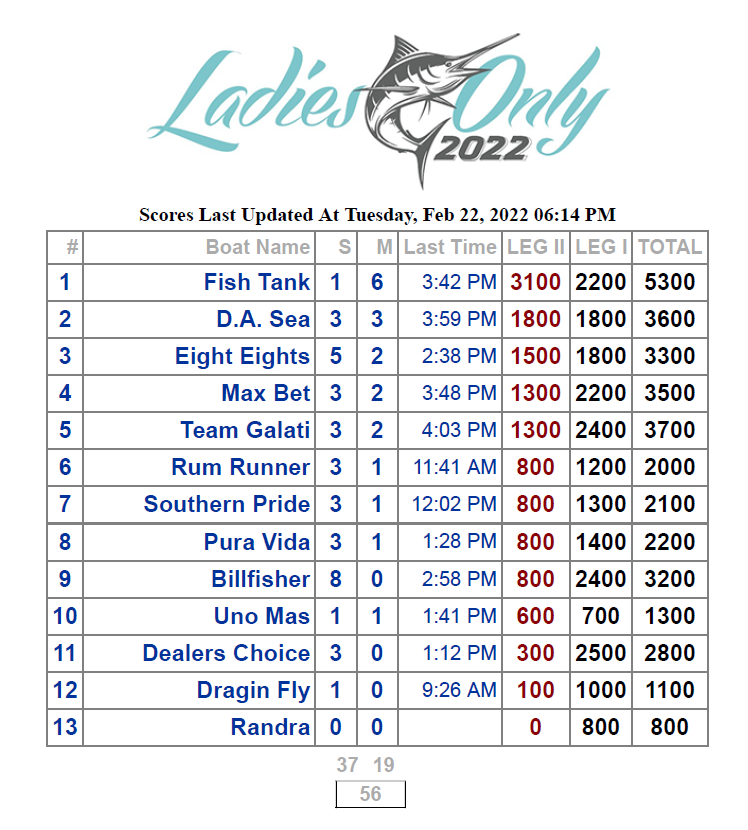 One hundred and ninety anglers comprising 38 teams signed up for the second leg of the 2022 Signature Triple Crown, presented jointly by Chantilly Air and Los Sueños Resort and Marina. Participating boats fished from Thursday, February 24 through Saturday, February 26, vying for top spot this leg and earning points towards the overall Series Championship, the winner of which will take home a grand prize check for $100,0000 as well as other prizes, not the least of which includes a custom take-home trophy sculpted by artist Sean Tuttle of Metal Ocean Tuttle Custom Design out of Hampton, Virginia.

The first fish released by Vaquero five minutes after lines in on DAY 1 set the tone for this leg of the tournament as it was a marlin. By 9:00 am six marlin had been released and by noon that number had doubled. As of the midday update Vaquero was in first with 1,000 points, followed by Max Bet with 800 points on time, over Pura Vida also with 800 points.

Where it took 4 hours for 12 marlin releases in the morning, the same number were released between noon and 2:00 pm! Whenever marlin are in the mix, you never know what the standings are going to be and no one’s place on the leaderboard is safe, demonstrated by the mid-afternoon update where Billfisher showed first with 1,400 points, followed by Fish Tank on time, also with 1400 points, and then Pura Vida in third with 1300 points.

By day’s end the fleet had released 93 billfish (56 sails, 37 marlin) and Pura Vida had taken top spot with 3 sailfish and 3 marlin releases for 1,800 points, followed by Billfisher (second), Fish Tank (third), D.A. Sea (fourth), and Miss AC (fifth) all with 1,400 points after releasing 4 sails and 2 marlin each. The tie between these four teams was broken by the time on the release of their last fish, with the top spot going to whomever achieved the points first. It doesn’t get much closer than that, especially given that Pura Vida squeezed into first with a marlin release at exactly 4:00 pm! 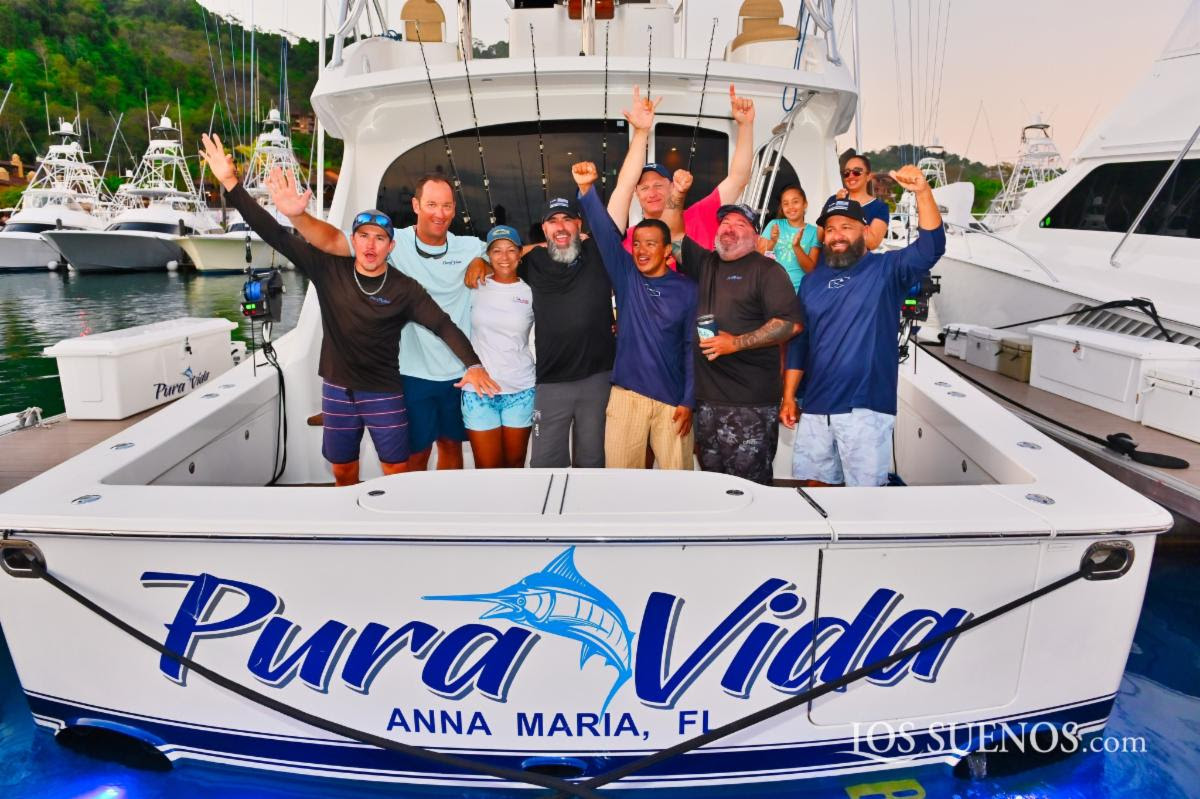 There were six marlin in the first two hours on Day 1 and the same number in the same amount of time on DAY 2. By 10:00 am the fleet had upped the two-day ticker to 67 sails and 43 marlin, with Pura Vida “comfortably” seated at the top of the board with 2,000 points, followed by D.A. Sea in second on time with 1,500 points over Pez Collector.

No one can sit idle during a Triple Crown event; Rum Runner came seemingly out of nowhere and into first by 10:49 am with three marlin releases early in the day and then solidified their lead with another three marlin releases by 1:03 pm, adding a sailfish to their scorecard at 2:47 pm. Pura Vida wasn’t to be left far behind though, and with six sails and six marlin achieved 3,800 points over the first two days and 3,100 points on Day 2 alone, well ahead of Pura Vida in second for the day with 1,800 points! Uno Mas (1 sail, 5 marlin) finished third on time over Vaquero (6 sails, 4 marlin), scores tied at 2,600 points each. With 111 billfish (57 sails, 54 marlin) released on Day 2, the two-day tally was up to 204 billfish releases (113 sails, 91 marlin). 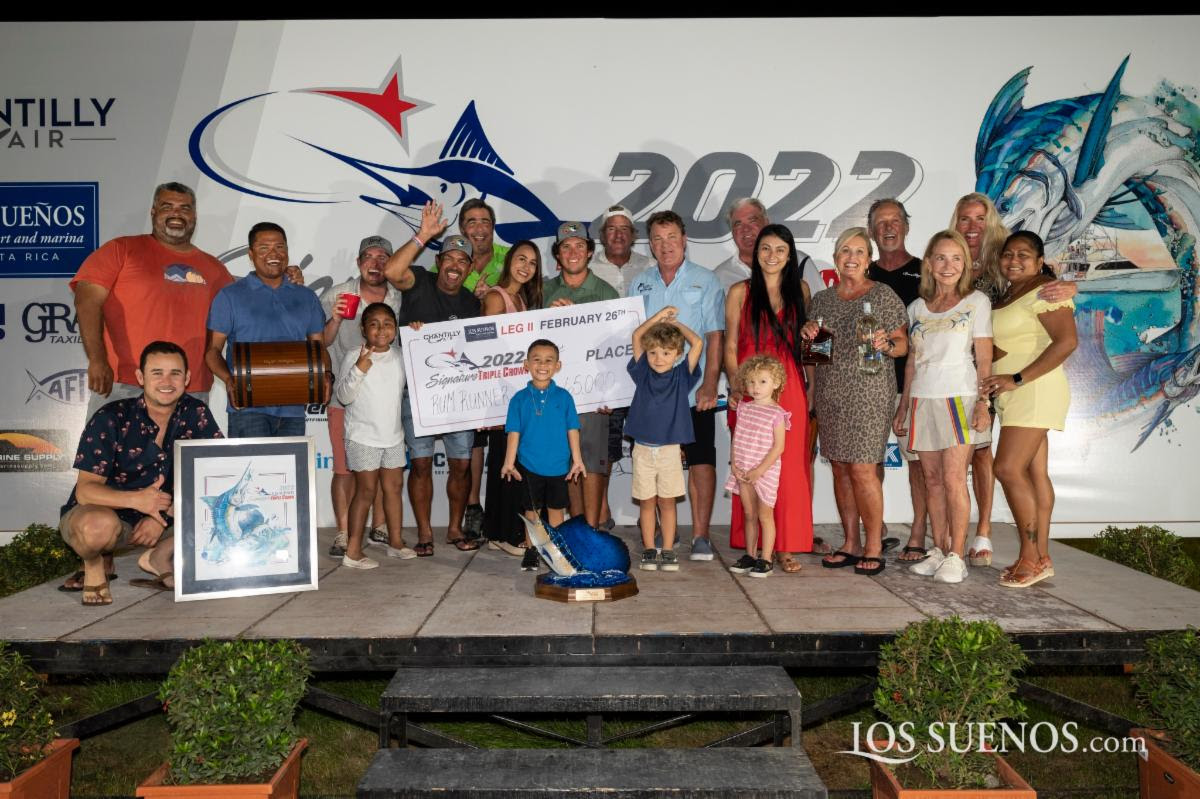 Every tournament there are certain names that pop up again and again. The first call on DAY 3 was made for the second day in a row by Smooth Move, this time at 8:11 am with a sailfish release. Thankfully there was a steady progression in the number of billfish releases over the three-day event, with 72 releases called in by noon on Day 3 alone, bringing the three-day total to 275 billfish (159 sails, 117 marlin).
Billfisher, always a strong contender, scooted into second with a marlin release at 9:46 am and then to first with another marlin at 10:38 am, bringing them to 4,500 points as of noon. Just eleven minutes past noon, Rum Runner released a marlin for 4,800 points and boom! They were back in the lead.
The leaderboard didn’t change over the course of the afternoon and by lines out on the third and final day it was Rum Runner in first with 5,800 points (3 sails, 11 marlin), followed by Billfisher in second on time with 4,600 points (6 sails, 8 marlin), and Vaquero in third also with 4,600 points (6 sails, 8 marlin) after releasing their last fish at 1:15 pm, 38 minutes after Billfisher’s last fish. While not on the leaderboard, Smooth Move had a fantastic showing on Day 3, releasing 3 sails and 4 marlin for 2,300 points. In yet another nail biter, Smooth Move called their hook up in to Tournament Control just minutes before lines out and fought to win the daily, releasing a marlin at 4:24 pm, the last fish of the day and of the tournament! 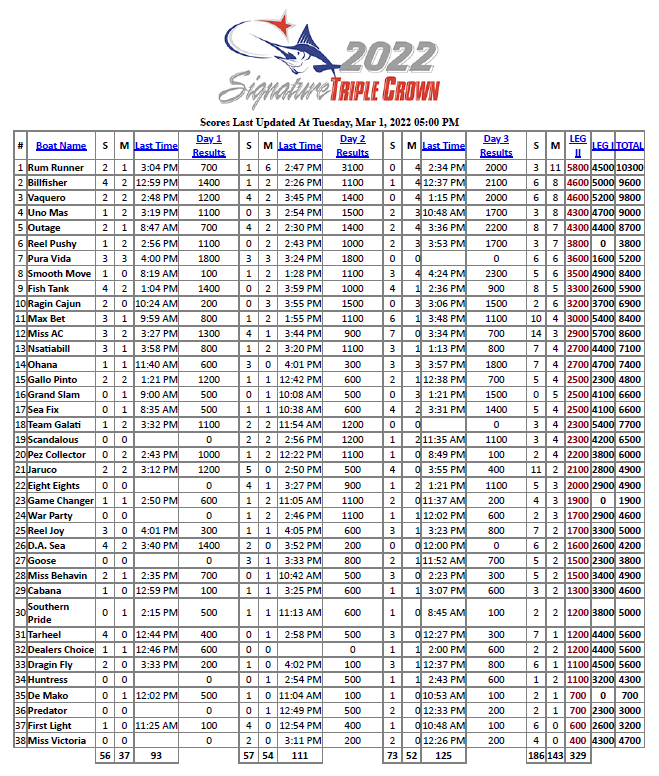